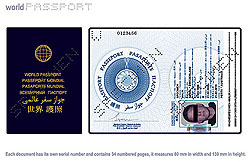 The World Passport Map is an intricate piece consisting of a world map with each country's flag found within itÕs current national border.

CONTEXTUALISING THE WORLD PASSPORT > THE ARTIST AS AMBASSADOR OF IDEAS The world passport is an artistic initiative developed by the artist Tom Mueller.
As a response to an ever-increasing globalisation, the world passport was developed in order to conceptually deal with the Zeitgeist of our times. The world passport recognises and respects the origin and culture of each human being in integrating them to the world. This concept aims to dissolve political and social boundaries and to encourage global awareness,
Worldly responsibility and environmental lucidity are some of many words that echo the essence of the world passport,
The physical role of the artist performer forms an integral part of the work. The artist takes on the role of "World Ambassador' in setting up a [World Passport Embassy at various locations around the world.
"I would position the WORLD PASSPORT as an antidote to this ridiculous US or THEM attitude --- there should be no THEM in this world, only US."
Matthew Jesse Jackson Gold, 2001

The Video Projector for Tom Müller's - homoglobus - Kindly Sponsored by